Posted at 16:10h in Language/Meaning by South Asian 0 Comments

By Muneeza Shamsie in Dawn, Books and Authors, Sunday, February 1, 2020.

Urdu poetry is celebrated for its multi-layered resonances which transcend time and age. Whether written in the 18th century or the 21st, it can be quoted in political meetings, debates and daily conversations to make an apt comment on current events, public or personal.

In recent weeks, Faiz Ahmed Faiz’s famous poem Hum Dekhein Gey [We Too Will See] — which was written as a critique of the Zia regime and rings out with its universal message of protest against tyranny, repression and injustice — has been chanted by huge crowds in India against the brutal attacks at Jawaharlal Nehru University (JNU) in Delhi.

The power of Faiz’s poetry and its ability to reach out across languages, cultures and nations is central to Anjum Altaf’s unusual collection of English-language verses, titled Transgressions: Poems Inspired by Faiz Ahmed Faiz. Each poem in the collection provides an intertextual engagement with, and adaptation of, a specific Faiz poem. Altaf supplements each with a brief note, giving the context in which it spoke to him personally and led him to capture its essence in his own verse.

Interestingly, the collection includes two poems, ‘Resist’ and ‘Speak’, which draw on Faiz’s ‘Dar-i-Umeed Ke Daryuza Gar [Supplicants at Hope’s Door] and ‘Bol’ [Speak] respectively. They were penned by Altaf in response to the Modi government’s 2016 attacks on JNU’s faculty and students protesting over issues of sedition. 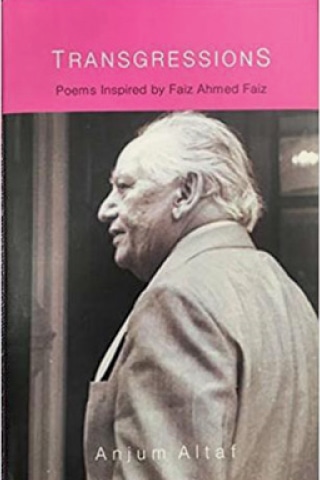 The reviewer is the author of Hybrid Tapestries: The Development of Pakistani Literature in English.