Posted at 12:09h in Reflections by South Asian 0 Comments 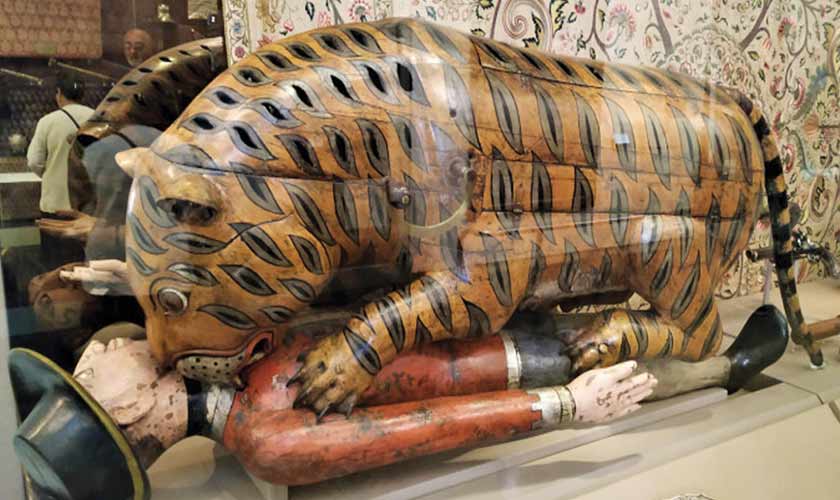 I read a strange proposal the other day — that Tipu Sultan’s famous tiger, safely ensconced in the British museum, ought to be returned to Pakistan because Pakistan is the Muslim successor state to Colonial India and also because the tiger is a symbol of resistance.

This is just so problematic at so many levels. First of all, Bangladesh is just as much a Muslim successor state of Colonial India as Pakistan and the fact that it has (wisely) not lodged such a preposterous claim should not be held against it. Given the fact that there are two successor Muslim states, how would a Solomon allocate the trembling tiger? Would the head be assigned to Pakistan as the senior successor state and the tail to Bangladesh for having arrived late on the scene?

And why should a Muslim successor state be privileged in any way in its claim? Just because Tipu Sultan was a Muslim doesn’t mean that a Muslim state has any kind of moral or legal claim on what belonged to him. Tipu Sultan was also a South Indian and by that token South India could file an equally credible claim. More credible, in fact, because that is Tipu’s birth place, where his descendants presumably still live, and where the people reside whom he ruled and fought for. As a matter of fact, there is more than one Tipu Sultan museum in and around Mysore where the tiger would be part of a larger collection and be reunited with familiar things. Pakistan’s claim to Tipu memorabilia is particularly weak because the Muslims of that region were not all enthusiastic about the creation of the country and were indifferent at best.

As for being a symbol of resistance, that is an even stranger, as well as an ironic, justification knowing the history of symbols of resistance in Pakistan. Who can be a bigger symbol of resistance against the British than Bhagat Singh and we can’t even name a road crossing after him. Then there was Faiz Ahmed Faiz whom we celebrated first by consigning to prison and then sending into exile. Hasan Nasir was tortured to death in the fort in Lahore. In our own times, Pervez Hoodbhoy can’t even find a place at FC College. I suppose the tiger is a safer bet because it is dead and can’t growl anymore except, perhaps, mechanically, an act our rulers are quite accustomed to having practiced it often themselves.

At the very least, I would ask the tiger if it really wished to relocate to Pakistan. Given the fact it would be unable to communicate its preferences, I would try and imagine myself in its position and elicit an objective response. At the mundane level, I would wonder why the tiger would wish to give up its 24/7 air conditioned perch in the British Museum to be lodged in some dark and dingy room subject to random bouts of load shedding in unbearable heat.

But at a more serious level, the tiger would wonder why it was being asked to be return migrant when the citizens of the country to which it was being condemned were dying to emigrate to the very land where it had already arrived. Damn the depredations of the British inflicted on Colonial India and damn all the resistance to British perfidy that inflames the hearts of the denizens of the Muslim successor states. Simply on grounds of supreme hypocrisy the tiger would turn its back on the proposal and demonstrate its displeasure if the appropriate function were programmed into its ingenious innards.

I used the term trembling tiger above for good reason. The tiger would know in its bones that the minute it arrived in the land of the pure, impure thoughts would start coursing through the minds of those assigned to its protection. Very soon, an eye would be adorning one drawing room, a claw another. The machinery would end either in Bilal ganj or more likely find its way back to some private collection in the West where such contraptions are admired and appreciated. The tiger would have a way of knowing the fate of the necklace donated by Mrs. Erdogan to raise money for the poor. It would have a way of knowing how gifts in the toshakhana find their way out of the country in the baggage of the rulers who live abroad and only visit the country for brief stints of governorship.

We should credit Tipu’s tiger with some modicum of sense given that it belonged to a king renowned for his courage and sagacity. It is seriously to be doubted it would voluntarily consent to a permanent relocation. If the people of Pakistan are actually dying to see the tiger, which I doubt sincerely given the traffic at our museums, it might consent to a brief tour under an armed guard. I am sure it would wave its paws and pretend to be grateful while wishing desperately for the return to a safe and dependable environment. It might even be grateful to Covid-19 if the display were to be reprogrammed as an online event. The HEC might be able to rise to the challenge to serve the educational needs of the people of the Muslim successor state.

Let Tipu’s tiger be and tie the camels that are running loose all over the place.

This opinion was published in The News on Sunday on July 12, 2020 and is cross-posted here with the author’s permission. The writer is the author of Transgressions: Poems Inspired by Faiz Ahmed Faiz, Delhi 2019, Karachi 2020.